December 31, 2020 / johnny / Comments Off on Punctuated Play: Revealing the Roots of Gamification

ABSTRACT: Even at the apex of its hype cycle in the 2010s, game studies scholars and designers derided gamification. This article first explores why gamification inspired such vitriol. It finds the incursion of non-game corporations and entities into the field was a threat to those who fought so ardently to legitimize the profession and promote a more playful or ludic 21st century. The article then delves deeper into the literature of play to redefine what occurs when a player engages with a gamified app, such as the social media application Foursquare. It rescripts their activity as ‘punctuated play’, or when the competition, conflict, glory, and other aspects of traditional play pierce a moment but do not necessarily define it.

Learning Beyond the Game: A Multimodal Analysis of Rocksmith Users’ Interactions

December 31, 2020 / johnny / Comments Off on Learning Beyond the Game: A Multimodal Analysis of Rocksmith Users’ Interactions

ABSTRACT: In the context of games for learning, rich multimodal conversations online can contribute to extending the educational potential of digital games. In this study, we analyzed the multimodal features of user interactions in an online affinity space dedicated to the Rocksmith digital game. This game allows users to connect a traditional electric guitar to a Sony PlayStation 4 console and interact with the game while improving their guitar playing skills. Findings show that users include several multimodal elements in their online conversations in order to support guitar learning beyond the digital walls of the game. Emoticons, emoji, pictures, YouTube videos, and user-generated videos are all part of a constellation of audiovisual modes that support social learning practices in an interest-driven online space. By understanding how users incorporate these modes in their interactions, game designers, game developers, and educators can make informed decisions on how to design and improve these features within the games themselves and in online communities of learning dedicated to such games. The findings of this study can also help these stakeholders and decision-makers create more engaging and more effective connections between games and online platforms

To Brand or Not to Brand: The Perception of Brand Image in the Digital Games Industry

December 31, 2020 / johnny / Comments Off on To Brand or Not to Brand: The Perception of Brand Image in the Digital Games Industry

ABSTRACT: The paper presents, discusses and analyses the role of building brand image in digital games. The purpose of this paper is to analyse and discuss in-game marketing in cultural spheres from the aspect of brand image. The aim is to explore, identify and present the relationship between brand image, consumer self-image and digital games as a brand. The contribution of this study is manifested in an interdisciplinary approach to work through marketing, psychology, sociology, and media theory. Consumers project their desires through digital games, and the brand’s entry into the digital game itself enhances the gaming experience and reality of the digital game. It was concluded that consumers want a realistic experience while playing digital games and they want to see famous brands within the game as this enhances their experience and projects the reality of the digital world. The core of brand image is consumers’ perception. In recent years, the digital game industry dominates this segment of the global entertainment economy. The paper analyses in-game marketing from the aspect of branding and sociology of culture. It is based on J. N. Kapferer’s theory of brand building and Huzinga’s theory of game. The article explores the meaning of the phenomenon of brand image and identity in virtual reality. The emphasis in this paper is put on the influence of brand image and digital game as a model of popular culture. This article adopts an integrated knowledge inquiry approach through thematic analysis to explain the concept of brand image. From the consumer’s point of view, the brand represents a symbol built on impressions, associations, metaphors and archetypes in the digital gaming industry. Brand loyalty is a key factor in building brand equity. The problem of brand loyalty appears as a reflection of brand symbol and its image. However, the oxymoron of in-game marketing starts from the hypothesis that consumers want to see brands in virtual realit

Cancer on the Holodeck: Metaphors and Cultural Construction of a Disease through Digital Games

December 31, 2020 / johnny / Comments Off on Cancer on the Holodeck: Metaphors and Cultural Construction of a Disease through Digital Games

ABSTRACT: A study from the OECD published that Cancer is one of the main causes of mortality in developed societies, with remarkably high prevalence, incidence and mortality rates for both sexes. This study closely examines nine digital games to elucidate how they conceptualize a disease like cancer around a narrative concerning the sickness, patients, treatments and outcomes. Discourse and content analysis techniques were applied to the message contained in the games looking to illuminate the connection between the narrative core, the audio-visual representation and the interactive aspects of the game, within the parameters of values-conscious design applied to digital games. This provides some evidence about the cultural and visual aspects of how game designers conceptualize the disease as a part of society. This research uncovers culturally embedded themes and reveals the prevalence of metaphor use in cancer discourse which relied on science, social support and spiritual convictions for social empowerment, building empathy and identification.

ABSTRACT: The paper discusses the criteria about how one can establish if a group is a new genre. It distinguishes between two main lines of thinking about genre in general – content and discourse. Both lines have two things to discuss. For content it is similarities and differences in mechanics, and for discourse it is commercial and social purpose of the use of new categories. The case studies then show how this can be applied to the rising auto battler class. There are 7 core mechanics in games that are similar, but every game differs in small details from others. The discourse in the social and commercial sphere has appeared over a short time period, and the adoption of the new genre by the gaming community was therefore fast. The bottom line of the text is that using rigid categories for discussions about digital games cannot focus only on rigid criteria, but also on context.

The Development of Ethical Education through Digital Games: The Butterfly Effect Implementation

June 25, 2020 / johnny / Comments Off on The Development of Ethical Education through Digital Games: The Butterfly Effect Implementation

ABSTRACT: The demands of educational practice are changing alongside our dynamically changing society. It is, therefore, necessary to purposefully and systematically seek ways to motivate, teach, and develop independent thinking among learners. This theoretical study aims to identify and characterize the essential assumptions and reasons for the implementation of digital games into ethical education classes. The fundamental premise is the thematic variability of game narratives, and a fulfillment of the experience attributes through the interactivity both in terms of the direct interactivity of the learner and the medium and in the subsequent discussion as a part of value reflection. Attention is focused on the process of ethical decision-making, ethical dilemmas, and problems that can be identified in many digital games containing at least a basic narrative structure. Interactive narration includes, besides the story itself, the influence of the participant on the further direction of the storyline, allowing players to see the consequences of their individual decisions within simulated situations. The study explores a game principle – the butterfly effect – in the context of ethical decision-making in particular through the game Detroit: Become Human, as well as demonstrates its usability within ethical education classes.

June 25, 2020 / johnny / Comments Off on ‘Is This a Joke?’: The Delivery of Serious Content through Satirical Digital Games

ABSTRACT: Games that utilize satire have largely been unexplored despite their potential to be used as learning supplements or tools to foster conversations around difficult large-scale topics. To what game genre do these games belong, and what are the uses and benefits for learning from such games? In this exploration study, we examine six popular and culturally relevant digital games (5 directly, 1 indirectly) utilizing satire as part of their narrative and gameplay. The range of games covers topics such as global overpopulation, the use of artificial intelligence for surveillance, and the process of mass capitalist production and the manner of its consumption. Satirical digital games serve both the purposes of serious games and entertainment games, pointing to the problematic connotations of the term serious games. It is suggested that the name satirical games is used to describe digital games created for entertainment with underlying political messages and to make a statement and/or commentary on society. Satirical games have potential as powerful learning tools to help facilitate discussion around difficult topics about society’s functions and practices. Future studies should examine additional digital game titles that rely on satire in their narrative and gameplay and investigate the relationship between satire and its role in the learning goals of the games.

June 25, 2020 / johnny / Comments Off on Watch a Film, Play a Game – Play a Film, Watch a Game: Notes on the ‘Intermedia-Presence’ of Digital Games in Cinema

ABSTRACT: The present study does not approach digital games per se and in accordance with the, so to speak, matter-of-course habitus, i. e. within the frame of game studies discourse (regardless of the ludology-narratology debate and probably even continuing tension), but rather in a wider cultural context and that by following essentially their relations to other cultural contents and phenomena, cinema in particular. Hence the intermediality discourse is within the pursued reflection applied as, from the point of view of the author, a fruitful framework. Intermediality can be legitimately approached as such a relation between media which, as Petr Szczepanik puts it, ‘creates indivisible fusions’. If we accept this thesis and utilize it as a starting point, film – connecting image, word and sound – appears to be intermedial apriori. On the basis of this and in connection with digital games (which, by the way, can be in terms of the aforementioned understood as intermedial a priori, too), such cinematic works of art – naturally, pars pro toto – are in the centre of interest here in which the a priori intermedial character of film is in a sense amplified or rather brought to a square (film as ‘intermedium2‘) – in this case and context by evincing ties, implicit and/or explicit, to digital games. 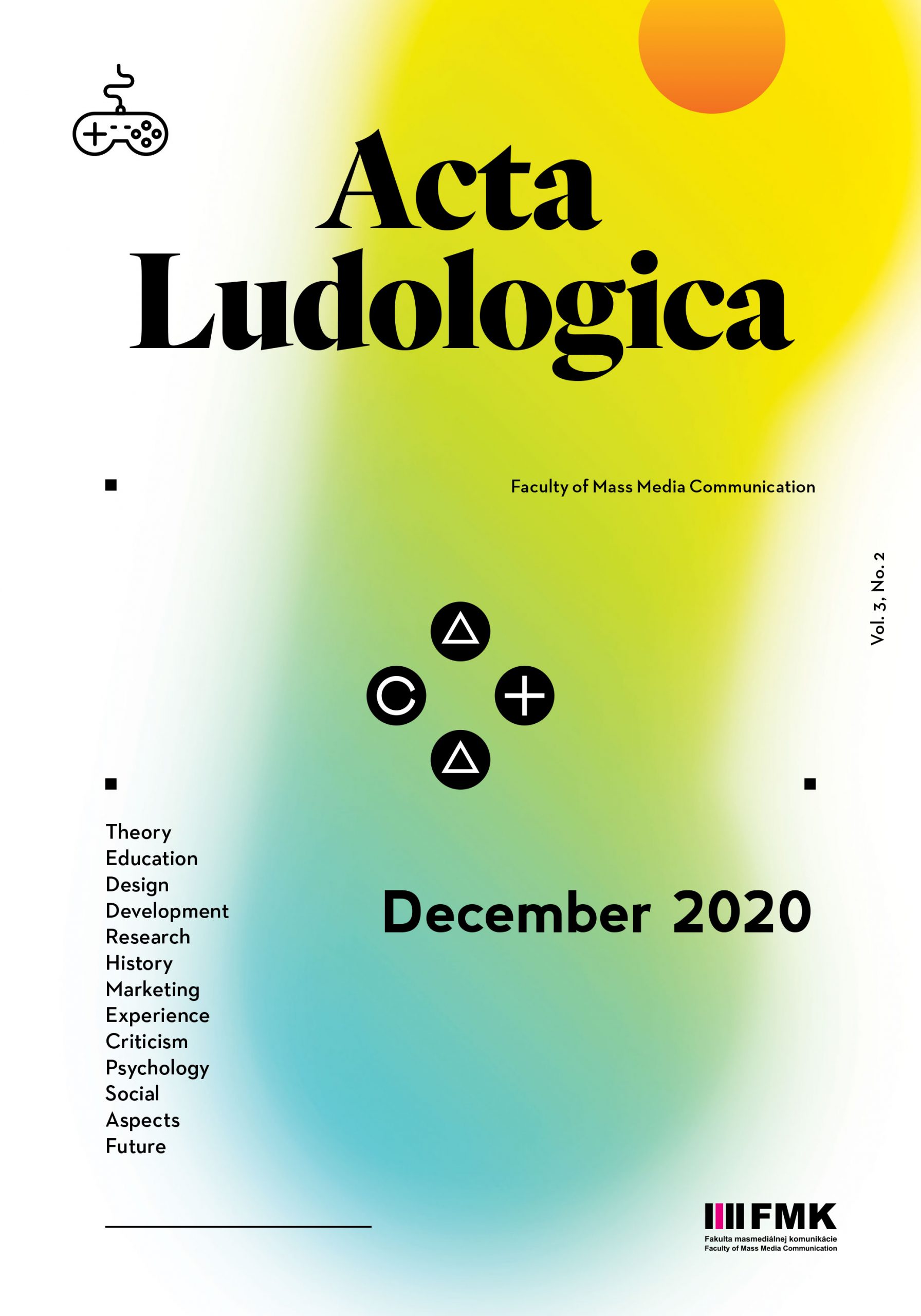